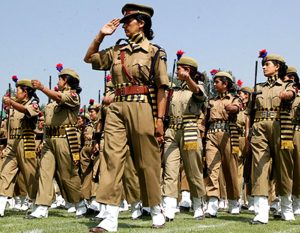 The whole universe is a creation of the feminine. Shakti physically manifests itself and can be felt everywhere in this prakruti. She is the one who makes Shiva come alive in the sagun form.

Vaishnovdevi is the temple that stand the tallest in the North of India and down south where all the temples originated were all the DEVI temples.The internal shakti in each body which we refer as Chitta shakti or kundalini is the same Devi shakti. The basic form of nourishment – cooking or food which nourishes our body from childhood till death is also the prerogative of a woman. All good qualities , love, tenderness, beauty, sexuality, fondness , rest with a woman. In today’s society the same woman has come alive in the purush qualities and has reached space. Dancing , music all these rest with a woman too. But today’s women have come alive in most rigorous manner and they too are on the forefront in the fields like archery, finance and so on.

Balance in srishti is again because of the same Devi Shakti. The word WOMAN envelopes the word MAN in it. So a woman is a complete avtaar. When a woman sets out to do something she becomes a Rani Laxmibai in Satyug. Chanda Kochar of ICICI is a phenomenal example in front of our eyes.

Man has always been identified with his strength, hence wrestling , hunting, archery rested with the men. During the olden times , even the senas used to be of men for physical strength and that is the only reason why women were subdued. In fact Manusmriti talked about a woman being a door mat.

Every beautiful creation like a flower , kundalini or anything that blooms is feminine and related to Devis. All our ancient tribe would have Devi symbols on stones which is where most of  the sex and religion were alive / known today , kuladevis are more than kuladevtaas. The real explanation of that feminine in today’s world is the ugly dressing. Culture reflects in a woman the way she dresses up. A fifty year old woman should not go out of the way and dress up like a twenty year old. She should age with grace. The real feminine beauty will still come out and bloom when she will be dressed as per her culture. Feminine will always be the feminine and that is the shakti, thats the fire.

Comparing   a woman with a man is no comparison and even a woman should not do that . Reservation for a woman in any section in a male dominated society is good but if it is in consideration with they being a weaker sex , then that reservation is no good.

Shakti when defined on a completely spiritual level would be either chitta shakti which will relate to the absolute or the maya shakti which will define the way world operates . Both cannot exist alone. In the highest states both maya and chitta shakti would exist . The only difference being that we know the universal truth, the self vanishes and the maya does not exist anymore. Just like advait and duality exist simultaneously but universal truth is advait or unity. Similarly chitta shakti is the shakti that has to be realised by each one of us on this earth.

If maya shakti is too heavy for being he will never be open to the absolute , the param ishwar. The greatest challenge in this life is to go beyond the body and reside within . However this would not mean renouncing life. For there is nothing completely worldly or entirely spiritual in this life. The right path would be that of Krishna where being in Dharma and spirituality one also celebrates life fully. Shakti of a physical being is in his breath , watching this breath and going with in are the 2 steps towards that awakening and then that shakti manifests itself to finally unite in the sahasrara  with Shiva.

When going deep within we would need to rise over and above the Gunas which is what Shivas trishul is all about, total control over satva, rajas and tamas.

When we go beyond the panchabhutaas or the panchatatvaas, we become purush over prakruti. 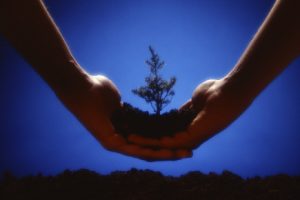 0Comments
The whole universe is a creation of the feminine, the g...

END_OF_DOCUMENT_TOKEN_TO_BE_REPLACED 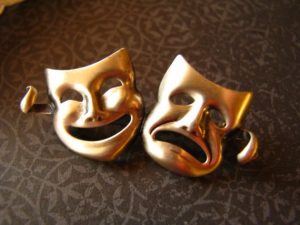 0Comments
Duality is the basis of this life and sorrow is just on...